Spencer Dales was born into a world of magic. His father belongs to the Aegis, a secret society of black magicians ordered by their unseen masters to better the lives of others—those with greater potential—but never themselves. Now it’s time for Spencer to follow in his father’s footsteps, but all … read more 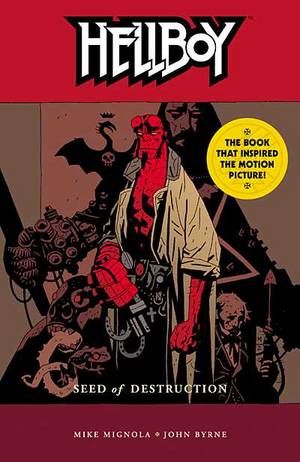 Hellboy, the world’s greatest paranormal investigator, is the only thing standing between sanity and insanity as he battles the mystical forces of the netherworld and a truly bizarre plague of frogs. And if he fails, we all fail with him! Hellboy is one of the most celebrated comics series in re… read more KELLY SUE DECONNICK (Avengers Assemble, Captain Marvel) & EMMA RÍOS (Dr. Strange, Osborn) reunite to bring you an all-new ongoing series that marries the magical realism of Sandman with the western brutality of Preacher. Death's daughter rides the wind on a horse made of smoke and her face bears th… read more A decade ago, 300,000 citizens of Philadelphia were suddenly lost in Oblivion. The government made every attempt to recover them, but after many years, they gave up. Nathan Cole...won't. He makes daily trips, risking his life to try and rescue those still living in the apocalyptic hellscape of Obli… read more Kyle Barnes has been plagued by demonic possession all his life and now he needs answers. Unfortunately, what he uncovers along the way could bring about the end of life on Earth as we know it. It begins here – with this terrifying new horror series from THE WALKING DEAD creator Robert Kirkman and … read more he one who wields the fire power is destined to save the world, but Owen Johnson has turned his back on that life. He doesn't want the power—he never did. He only wants to spend time with his family and live his life, but unseen forces are at work to make that impossible. Danger lurks around every … read more Jedidiah Jenkins is a farmer-but his cash crop isn't corn or soy. Jed grows fast-healing, plug-and-play human organs. Lose a finger? Need a new liver? He's got you covered. Unfortunately, strange produce isn't the only thing Jed's got buried. Deep in the soil of the Jenkins Family Farm, something d… read more When an eight-year-old girl literally begins to transform into a tree, her single mom, troubled brother, and possibly insane grandfather embark on a bizarre and heart-wrenching odyssey across the back roads of America in a desperate search for a way to cure her horrifying transformation before it’s… read more Buckaroo, Oregon has given birth to sixteen of the vilest serial killers in the world. An obsessed FBI profiler investigating the town has suddenly gone missing, and now an NSA Agent must work with the notorious serial killer Edward “Nailbiter” Warren to find his friend and solve the mystery of “Wh… read more n the 1990s, DEAD EYES was a prolific stick-up man and hoodlum in Boston until he took down one last big score and disappeared. Nobody ever discovered the truth. He retired to be with the love of his life, but now he’s back in the mask to save her. No one—not his wife, the mafia, or the cops—is hap… read more